Back to Casio Main Page

The Casio AL-1000 was introduced in October 1967. It was Casio’s second all-transistor 4-function calculator. As was often the case in the dawn era, many of its claimed features were limited by the available technology of the day. 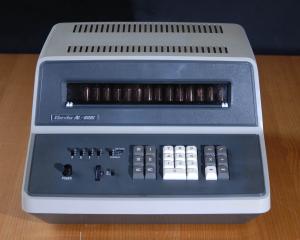 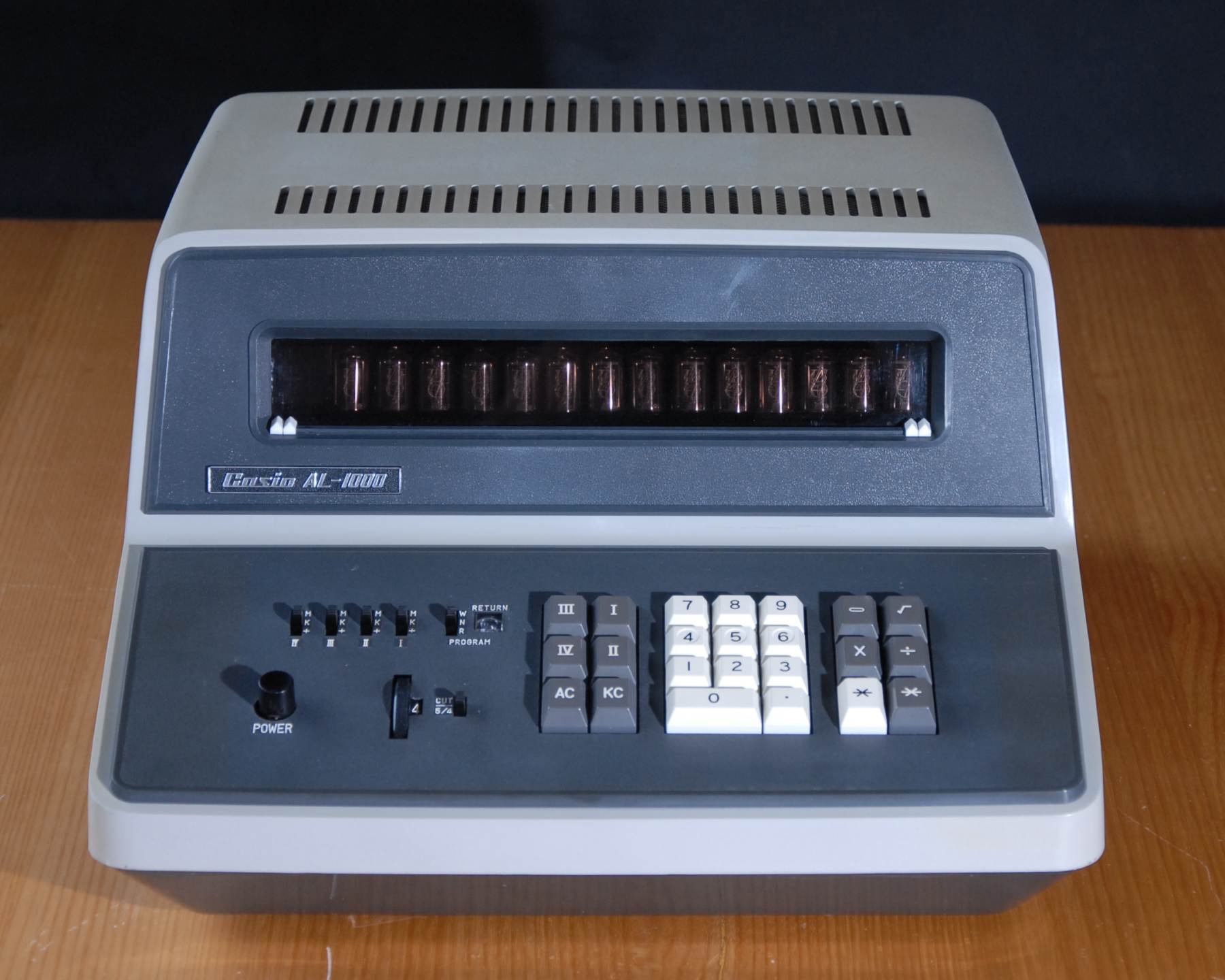 The AL-1000’s operator had to be constantly aware of the restrictions and limitations described above. Results could be

The operator’s role was more like that of an early computer programmer, tailoring the solution to the known capabilities of the machine and constantly monitoring the output to ensure that errors had not crept in.

Calculating with the AL-1000

The AL-1000 follows an “arithmetic” operating protocol where the first operand is entered, then the relevant operator, then the second operand and the result is generated when the “equals” key is entered. Attempting the sequence “2 plus 2 equals 4” reveals that there is no “plus” key and attempting “2 times 3 equals 6” begins more promisingly but then reveals that there is no “equals” key!

Inspecting the keyboard reveals two cryptic keys with the same “star” marking, one white and one gray. These multipurpose keys act as plus, minus, equals and decimal resolution operators according to the current state of the machine:

With this information it is possible to perform 4-function arithmetic:

The AL-1000 handles and displays negative numbers and correctly follows the arithmetic rules for addition, subtraction,multiplication and division. The “minus” key changes the sign of an operand during entry but does not operate otherwise. To change the sign of a displayed result, the operator must formally multiply it by -1.

The number of digits to the right of the decimal point can be controlled with two settings:

Decimal selection and rounding is applied on a case to case basis according to the use of the “star” keys:

Four memory registers are provided, the I, II, III and IV keys function according to the current machine state:

Three operating modes are available for each memory, set by a slide switch for each

Three of the memory registers have restrictions and care must be taken as there is no indication if any of these are encountered:

The AL-1000 is subject to a number of error modes, most of which are silent with no operator indication, and all of which are unrecoverable.

Moving the P/N/R switch to P allows the recording of up to 28 keystrokes. These can be replayed once by the run command. There are no facilities for conditional branching and no jump or loop instructions so the programming facility is somewhat limited. The only sophistication is the ability to pause a replay for intermediate results to be copied down or for additional operands to be supplied. The program designer must also guard against the silent error modes listed above, lest the program run but generate wrong results.

The actual programming method is quite rudimentary: the table below describes the correspondence between operations that are available in program mode and the keystroke that is entered to represent that operation. Since each program step is represented as a single digit, the combination of a number and a decimal point is used to represent further operations after the ten single digits have all been assigned.